But as for you, teach what accords with sound doctrine.
-Titus 2:1

If you believe what you like in the gospels, and reject what you don’t like, it is not the gospel you believe, but yourself.
-Augustine of Hippo

I grew up in a bit of a theologically homeless situation. I went to a nondenominational/Bible church which changed leadership a few times while I attended. My parents met at a private, Presbyterian school, and while my family didn’t believe in paedobaptism, I certainly grew up feeling more in common with the Presbyterian PCA believers than I did most who would call themselves “nondenominational.”

Generally homeschooled and pretty well informed, my peers in the youth group and at Bible Camp had a variety of beliefs on any given theological question or issue. Though we differed on some finer points, our beliefs generally orbited around Christian truth and there was a kind of gravitational pull that kept us all within a certain distance. Well, we all grew up. The late 90s/early 2000s stereotype of children deviating from and rejecting out right the faith they once held dear was certainly true of my church.

I’m not surprised that some children raised in theologically conservative Christian homes rejected the faith of their parents—opposition toward and doubt of Christian teachings is not a new thing. However, one thing I find curious is the passionate desire many have to reject the core teachings of Christianity (or at the very least a Christian epistemology) and still claim to be Christians.

Of course—especially in the South—there are potential benefits with bearing the Christian label in business situations. On top of that, I understand the commercial nostalgia of celebrating Easter and Christmas, and the sense of community one feels from attending church with friends and family, regardless of whether or not you believe the songs you sing and the sermons you hear. But at some point, what you believe must be what informs and defines who you are. If you do not believe Christianity, you are not a Christian.

When Jesus ascended into heaven roughly 2000 years ago, the risen Lord entrusted the message of salvation to his disciples. As the earliest leaders of the Christian faith—and endowed by God with a special sense of apostolic authority—these men would shape how Christianity would be understood forevermore. But even as the book of Acts catalogs the fledgling stages of Christianity, there were issues that had to be evaluated, discussed and eventually established as either something that was consistent with Christianity or something that was not (Acts 11, 15). Furthermore—after Acts—nearly everything in the New Testament was given to instruct and correct Christians so that they understood what was consistent with Christianity and what was not.

Christian theology since Pentecost has not been without disagreement. And thanks to various schisms in the church (most notably the Protestant Reformation), having an authoritative declaration of what is/isn’t Christianity is increasingly difficult. Nowadays there is the Orthodox Church, the Roman Catholic Church, and the Protestant Church. These all have many subgroups or denominations that hold sometimes widely different views on various issues. Add to this chaotic mixture the rise of secularism, postmodernism and pluralism and you sometimes wind up with individuals who would call themselves a “nondenominational Christian” even though they were raised Catholic… but they’re not really sure if there should even be religions because truth is relative—except for of course “their” truth. This person may seem like a rare breed, but if you discuss religion openly, you’ll find you have versions of this conversation frequently.

I think part of the issue comes down to the mingling of what Augustine would call the church visible and the church invisible. The idea here is that there are many who attend or are members of a church who have not yet truly experienced salvation in Jesus Christ (though they may think they have). This is the visible church; it’s what the world sees when it looks at all those who claim to be Christians—even if everything they say and do seems to contradict that claim. In contrast, the invisible church is the collective of true believers.

When these groups gather together, it is no surprise that they have different opinions—they serve different masters. One of the things that makes this so complicated is the asinine notion that what someone says they are—rather than what they believe—defines what group they belong to. Here’s a good example of what I’m talking about: 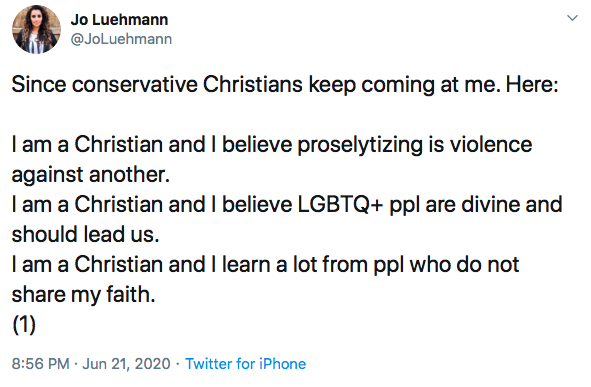 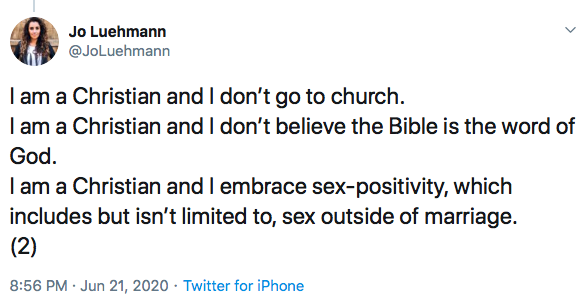 While I believe this Twitter user represents an extreme, I don’t think someone has to be this far detached from reality to be harmful to themselves and others. In stating her beliefs, she seeks to redefine Christianity with things that are categorically non-Christian. The problem here is that Christianity is composed of core beliefs and ideals. Devoid of these beliefs and ideals, it ceases to be Christianity. Beliefs can’t be classified as Christian beliefs if they contradict foundational elements of what Christianity is; it can’t be Christianity just because that’s what you call it. Her Twitter thread (found here) continues for a total of 10 tweets, ending with this statement: “This is my space. This is my truth…”

Concerning Christian doctrine, there’s an evil present in the church today whereby those who call themselves Christians are subscribing to an ever-widening spectrum of ambiguity. We’re pretending that so long as people exercise a certain level of Christian temperament or social norms, they can believe whatever they want to believe and still consider themselves a Christian.  In an effort to make Christianity as palatable as possible to the masses, we’re losing the ability to call it Christianity. Simply put, some things are consistent with Christianity and some things are not. What we need now more than ever is for Godly men and women to do as the apostles did at first—to clearly proclaim the scriptures and thereby separate truth from error.

And finally, this is a cause for self-examination. If you are someone who claims to follow Christ, ask yourself—do you believe his teachings? Do you love his word and look to it for guidance and wisdom? When confronted with controversy about Christian ethics or moral dilemmas, is God’s word your standard of truth? If not, why not?

12 For the word of God is living and active, sharper than any two-edged sword, piercing to the division of soul and of spirit, of joints and of marrow, and discerning the thoughts and intentions of the heart.
-Hebrews 4:12

A helpless, hopeless wanderer whom God has majestically adopted. View all posts by randnelson