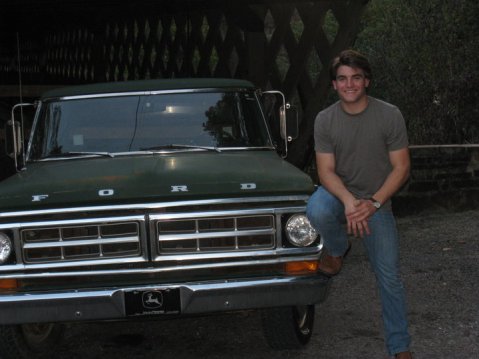 So the woman left her water jar and went away into town and said to the people, “Come, see a man who told me all that I ever did. Can this be the Christ?”

When I was 20 years old, I bought a 1971 F-100. In 39 years, the previous owners had only managed to scrap together around 56 thousand miles. For the price and the quality of the truck, I had gotten a great deal.

The whole truck was solid steel and the engine coughed and puttered like Uncle Buck’s old Mercury Marquis. It was a classic, in fact, it was so classic , that it  lacked FM radio and air conditioning. The engine easily flooded, and sometimes I had to get under the truck to reattach certain corroded cables just to make it start.

Not long after I had bought it, I was driving down the highway near my college campus. I went to press on the brake and nothing happened. The brakes were completely shot. I managed to get to a parking lot and slow it down so that I could throw it into park. I survived the terrifying incident, but knew my truck needed a lot of work.

To wholly replace the brakes, as well as to update some belts and hoses in the engine, I was looking at just over $1600. Suddenly, my truck felt like a weight around my neck. I had immediate buyer’s remorse, but that wasn’t the end of my troubles. Over the course of the next few years I would replace the starter, the power steering box, the master cylinder (2X), and, of course, the brakes would need replacing again.

While I loved driving this truck, loved having people ask me about it, loved random people interrupting my meal somewhere to make an offer on it, I can’t imagine that I would’ve bought the truck had I known all that would go wrong with it. In theory, it was great: a classic, cool, bachelormobile, but all the work and money that had to be poured into it made me question its worth.

When Jesus approached the Samaritan woman at the well (John 4), he knew her every flaw. She had been married five times, and was currently exchanging rent for sex with a man not her husband. Burdened and shamed by her past, she had been cast out and whispered of by all the people whom she knew. This is why she was alone, and yet it is in spite of this—and because of this—that Jesus offers her living water.

When you buy a used car, you don’t always know exactly what you’re getting. Sometimes you get miles down the road before you question what that noise is, and then you wind up spending more than you ever imagined. In that moment, it’s easy to completely regret your purchase. But that isn’t how Jesus buys stuff.

According to the scriptures, Jesus has always known exactly what he’s buying. In time and space, He knew the sinfulness of all His children and still counted it worthwhile to go to the cross. He doesn’t test drive his children to make sure they’re a safe investment; rather, He knows their weaknesses, He sees their flaws, and He purchases them anyway. This may very well be the most glorious part of the gospel—that Jesus marches into the junkyards of our world, purchases decrepit clunkers, and transforms them into His glorious children.

In regard to the children of God, my pastor said something simple and profound this past Sunday, “He has you because He wants you.” I can look back upon the mileage of my life and see a great many number of reasons why I would be considered a poor investment, but I am not yet what I will one day be. And I would never be, but that Jesus bought me as I was—knowing the full potential of my sinfulness—and chose to love me anyway.

A helpless, hopeless wanderer whom God has majestically adopted. View all posts by randnelson